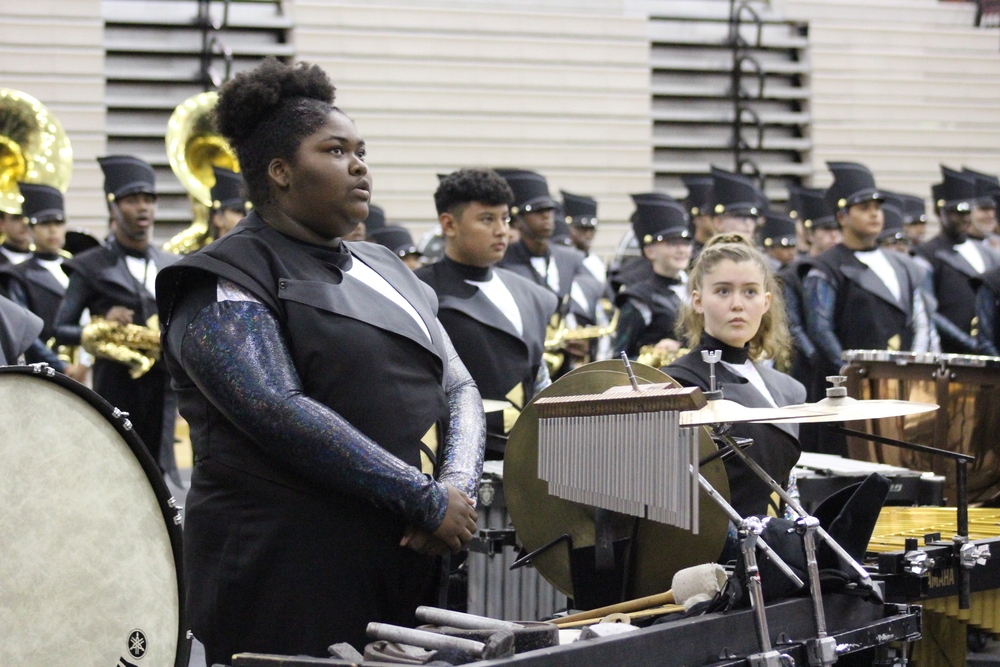 On Oct. 26, the Gold Brigade competed and earned fourth at their state competition at Lawrence Central High School.

“This season has been the most competitive out of the last couple years,” senior Ilaina Razo said. “Past successes definitely gave us a high morale and belief we could be successful this year.”

During the preliminary round at Whiteland High School, the band and guard qualified with a gold rating and a distinction in General Effect, Music and Visual. This solidified the group’s spot in the Indiana Scholastic Class State Finals.

“Prelims was one of our strongest performances as a group,” senior Eugene Billings said. “We won all of the distinction awards, and we continued to cement ourselves as a front runner in our class.”

During the day of the state competition, the Lawrence Central area experienced heavy rainfall, and the Indiana State School Music Association (ISSMA) does not reschedule events with a calibre such as the state finals. Instead of rescheduling the competition, marching bands from all over Indiana had to combat the compact environment of the school’s gym in an improvised solution to the weather conditions.

“Throughout the entire season, we practiced diligently and hoped to win another state title this year for marching band,” senior Duyen Quang said. “Unfortunately, it was ultimately decided that the performance was going to be indoors due to the rain. Without our props, light and visual aspect of the show, we were pushing it hard to secure a win for this season, but the band didn’t give up.”

The band and guard did not know certainly they would have to perform indoors until the day of the competition, but the students were informed ahead of time that it was always a possibility. So instead of performing in a space as big as a football field, the group was restricted to a considerably smaller space: a basketball court. All season, the students practiced and perfected their performance outdoors and made sure all of their movements were precise, but they did not have the same liberation on the basketball court. The band was limited to standing still and playing their instruments.

“It was certainly very different than what we were used to,” senior Joaquin Lagunas said. “At first it did feel unfair, but we realized that indoors or not, we practiced a lot, and we needed to go in there and try our best.”

“For the color guard, it was a really good thing. We didn’t have to deal with wind or any other crazy conditions that would’ve impacted our show,” senior Angelina Kelly added. “Although our show would have benefitted 100 percent for an outdoor performance, we adapted really well.”

Although the hardships of the last minute adjustments, the members of the Gold Brigade and Guard were able to compete with the best marching bands and guards in the state of Indiana and are happy with their finish at the ISSMA state finals.

“We first felt really anxious [at state] because we were against really good bands, but later, we felt proud of how we performed,” Alvaro Lagunas said. “We gave our all since the beginning of the season. At the end, we were proud that we did this together.”