This search form uses an instant search feature. As you type, search results will appear automatically below the search field. When you've entered you desired search terms use tab to navigate through the available results and hit enter to open the selected page or document.
Protesting Quarantine
NAOMI EASTMAN
Monday, May 18, 2020

Citizens all around protest the current world situation in disagreeable ways.

In comparison to the average busy day months ago, the sudden self isolation due to COVID-19 was quite the turnaround. Those who hardly spent any time at home now have nowhere else to go. The current world situation is quite disagreeable to many, and some are taking that to the extreme.

For those who cannot stand being cooped up indoors, to those who have lost their jobs over this crisis, whether temporarily or permanently, it seems like everyone’s lives have been turned upside down. According to the New York Times, over thirty-six million Americans have already lost their jobs due to this pandemic as of May 14.

Amidst this modern-day chaos, many people protest the uprooting of their lives the virus has caused by leaving their homes and meeting in gatherings. Many protest for defendable reasons such as the right to work for the working-class citizens who cannot afford to be out of work. Others protest for missing experiences such as prom, vacation or even because they need a haircut due to the sole reason that they feel that their freedoms are being limited.

According to Now This News, some protestors in New York make the claim that the virus is not real, claiming it is just an attack by the media to scare the public into submission. Others are aware of the virus’s authenticity, however, still protest because they believe people are going to die anyway.

Meanwhile, over 22,000 have died from the disease as of May 6 in New York, though despite this the protests continue. It seems now the citizens of America believe more in their freedom than the lives of those who could potentially be affected by the virus.

With the amount of deaths caused by this virus, mass graves are now being dug to help relieve morgues, similar to what was being done during the bubonic plague. The ignorance towards COVID-19 and the stay at home order will only make this pandemic worse and take many more lives than necessary. The sooner everyone cooperates and allows the virus no more hosts to infect, the sooner everyone’s lives can go back to the “normal” they all crave.

COVID-19 is not an end of the world situation, and it can stay that way if society begins to accept that saving lives is more important than an unkept hair-do, missed out vacation, or a night of school fun. 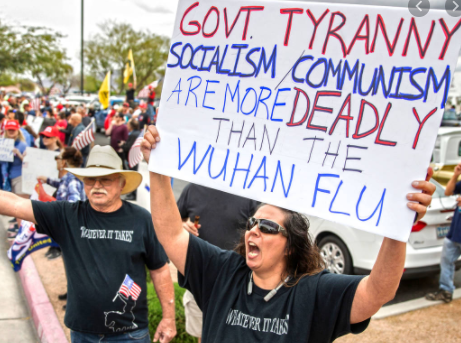