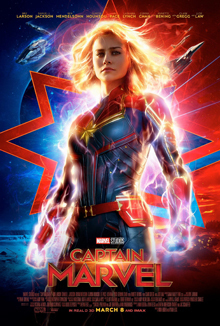 After the ending of last year’s “Avengers Infinity War,” superhero fans have been anticipating the arrival of “Captain Marvel,” the Marvel Cinematic Universe’s first female led movie. “Captain Marvel” follows Carol Danvers (Brie Larson) in her fight in an alien race war between the Kree, intelligent warriors, and the Skrull, shapeshifters. Danvers searches to find herself while also trying to aid her people in their war. During the movie, Danvers meets new people like Nick Fury and reconciles with friends from her past. The movie is based off of the Marvel comic “Kree-Skrull War,” despite Carol Danvers not being an important character in that storyline.

The movie was enjoyable and worth seeing in theatres. It was a fitting introduction of Carol Danvers to show her importance in later films, the plot development and delivery worked well throughout the movie, and there were multiple moments where the audience was in awe of how well the movie developed Danvers’ character.

After the ending of Infinity War, it became apparent that Carol Danvers would play a big role in defeating Thanos and the MCU. Marvel fans worldwide were left to figure out how she would come to know agent Fury and how important she would be in the later movies. “Captain Marvel” serves as a good way to familiarize fans with Danvers and her powers. At times she seemed overpowered, like in one scene where she’s flying around space single handedly fighting a fleet of ships; however, the writers also found a way to handicap her. Danvers’ past and naivety are often used as crutches for her throughout the movie.

“Captain Marvel” is different from other MCU movies in that it focuses heavily on character and plot development. Since the MCU has been around for 10 years, they have spent multiple movies on developing their characters. They change that with “Captain Marvel” as they have her grow and learn over the course of just one film. The audience gets a chance to watch Carol grow from a naive girl to a powerful hero, while also watching the intense plot unfold in front of them. There was very little wasted time in the movie as it seemed like every scene served a purpose in the storytelling.

The movie managed to keep audiences on the edge of their seats. With slightly over a two hour run time, the movie has to find different ways to keep the viewers on edge. The skrull’s transforming abilities helped with that due to the audience never knowing who could be a skrull. Along with that, the movie had multiple twists and turns that engaged the audience. Even when the movie seemed like it was going to run the course of a normal hero movie the writers throw in a major plot twist to kick the rest of the movie into a new gear.

Overall, “Captain Marvel” was a great movie that will have viewers even more ready to see what’s next in the MCU. The movie feels like a mix of both the first “Captain America” as well as the first “Guardians of the Galaxy” with it taking place in space. “Captain Marvel” was a solid eight out of ten holding up with the standard of MCU movies being great. It is a movie that comic and superhero fans in can both enjoy. It is playing in most movie theatres in the area including the AMC on Washington Street.