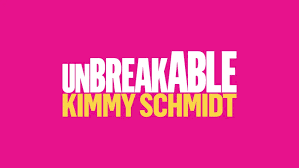 A quirky comedy about modern life in New York city, “The Unbreakable Kimmy Schmidt” wrapped up its four season run when the final episodes of the series dropped in January. This comedic sitcom was created by Tina Fey and Robert Carlock and lasted 51 episodes, all of which are available on Netflix.

The show centers around the main character, Kimmy Schmidt (Ellie Kemper), who was recently rescued after being held captive for fifteen years. She was held captive with a group of women in a bunker by a deranged cult leader and wedding DJ Reverend Richard Wayne Gary Wayne (Jon Hamm) in Durnsville, Indiana. Upon being rescued, the group of women are nicknamed the Indiana Mole Women, but Kimmy wants to escape this reputation she has gained from being a victim. In order to do this, she decides to live in New York, moving in with a failed actor, Titus Andromedon (Tituss Burgess), in a rundown apartment whose landlord is a crazy old woman, Lillian Kaushtupper (Carol Kane). Quickly after moving to New York, Kimmy realizes that it will not be so easy when all of her money is stolen. She remains encouraged to move on from her past experiences and stays optimistic. Kimmy soon takes a job as a nanny for stereotypical housewife, Jacqueline Voorhees (Jane Krakowski).

The series follows Kimmy as she navigates her new life, learning how the world really works, and moving on from the traumatic experiences she faced being trapped in a bunker for fifteen years. The series also hosts a multitude of stories for the rest of the characters. A plot line involves Titus attempting to make it as an actor while trying to fall in love. Lillian must accept new changes in the city, while getting over her dead lovers. Jacqueline must come to terms with her own past and learn to be a self sufficient person.

This allows for much comedy in the show, as characters are always easily usable for jokes. The show often points out how overused these stereotypes are and often pushes them to the next level, creating weird and zany character in a world that while may seem normal at first, is no less odd than the characters themselves.

The comedy in the show is not meant to be taken seriously, while sometimes providing light comedy on current events, the show stands to show an exaggerated version of the real world. While it would be expected that only the main characters would be the ones with the odd outlooks on life and the weird actions, but the entire cast and world is the same way. This allows for situations to escalate quickly and produce unexpected results.

Another thing the show does well is keeping a lighthearted tone. The show, while every once in a while has a deeper and more serious scene, for the most part the show remains lighthearted. This is a great show to just watch and laugh.

Even with the lighthearted exaggerated comedic tone of the show, characters still grow in their own ways, and at the end of the series each character is changed and has gone somewhere in their life. There are even some touching moments in the series, when characters have to go through something negative, but this never weighs down the tone of the series.

During the four season run, there was one thing that the show never seemed to be able to grasp, that being the pacing. While the pacing of events in the first two seasons feels fine, once the show reaches it later two seasons, it sometimes felt like the writers did not pay close enough attention to the pacing. Some plot points would be wrapped up in a single episode, while other less interesting ones would slog on for many episodes. This problem comes to a high point at the season four episode “Party Monster: Scratching the Surface,” which is a parody of a true crime documentaries and takes a look at Reverend Richard Wayne, the man who kept Kimmy locked up in the bunker. This episode, while the normal length, felt very long and without any good humor. This is a problem especially if someone were to binge the show, although if watching throughout a longer amount of time, this may not be as big of a problem.

“The Unbreakable Kimmy Schmidt” overall is a fun light hearted comedy, perfect for anyone looking for a lighter show with fun characters. The show is four seasons long with 51 episodes total and is available exclusively on Netflix. The characters allow for a lot of comedy that makes the show truly good. The show offers light commentary on real world events. The biggest problem with the show is the pacing near in season three and the first half of season four, but it is definitely worth it to push on and see the end of the series.