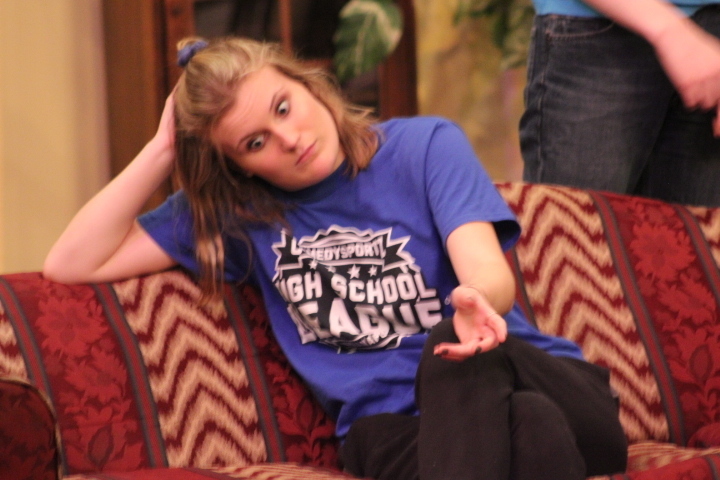 Rumors of something great

Rumors is a comedic play, originally written by Neil Simon, that was recently put on by the talented students in the Warren Central Performing Arts Center.

Rumors was held in the studio theatre from Thursday, April 18 to Saturday, April 20, at 7 p.m. Admission was six dollars per ticket and tickets sold out on two of the three nights. This play is considered a farcical play, meaning the comedy is mostly driven by the exaggeration of events that happen throughout the story. The performers put on this play perfectly, it was entertaining to watch, the actors were great and the promised humor was delivered.

The basic story of the play is that at the 10th anniversary party of Charlie Brock and his wife Myra Brock (Sara Shuffitt), Charlie is found by Ken (Alex Bussey) and Chris (Taylor Buckner) Gorman with a bullet hole through his ear lobe, and Myra is nowhere to be found. Ken and Chris believe it may have been an attempted suicide and decide they must keep this information from getting to the other guests as they arrive at the party. This proves difficult as it seems odd to all the guests that the two people that the party was thrown for are not at the party. All the guests at the party along with Charlie are important people, and getting involved in a suicide scandal would end their careers.

As the pairs of guests arrive, each bringing along new personalities and humor to the play. The first guests to arrive are Lenny and Claire Ganz (Evan Law and Kylee Brewster), who were in a car accident on the way here, wrecking Lenny’s new BMW. This leads to new humor as both characters are cynical and overdramatic. Chris greets them at the door and attempts to hide the fact that Charlie has been shot and Myra is not there. Though even with these attempts, the truth still gets out. The next couple to come in are Ernie (Daniel Dorsey) and Cookie (Madeline Reyes-Cruz) Cusack, both are very sweet but quirky characters. The final couple to arrive is Glenn (Richuan Stewart) and Cassie (Shanya Unseld) Cooper, who have issues with their relationship, as Glenn has been cheating on Cassie.

As each pair of guests arrive, the lie they tell each other to cover up Charlie and Myra’s absence grows. Eventually the lie fails and all the characters are told what has happened. All the characters are concerned, but seemingly not for Charlie, but for themselves and what this will mean for their careers. The panic from the characters as they try to figure out what to do brings a ton of laughs. All the characters are trying in their own way to make sense of the situation and are trying to find a way so that they are not involved. Though this comes to a climax when two officers appear: Officer Welch (Sanaa Boyd) and Officer Pudney (Ischela Keeylen), who are at first there to investigate a car accident, but then to investigate the sounds of gunshots reported coming from the house. The cops interrogate the party guests, and a few of the guests swap identities in order to act as Charlie and Myra who are still missing The cops are only persuaded when Lenny, acting as Charlie, tells a complex, over the top story explaining the events of the night. To the relief of the guests, the cops believe the story and leave the house.

A large part of this play is its humor, and for the most part, the humor went over well, and never felt forced or bad. As the play went on, the wilder the jokes got, and the more the audience was laughing. Each of the characters had a starkly different personality from each other and their banter between each other was fantastic. Characters often react in over-the-top ways, leading to hilarious situations as characters panic while others stand around not caring.

A lot happened in this play, there was always something happening on stage, characters were always bantering, joking or doing random things in order to try and cover up what has really happened. A good way to describe this play would be busy, but not in a bad way. There was always something for the audience to look at or listen to, and at times, there were even multiple things happening at once.

This is all brought together perfectly by the cast and crew of the play. All the actors were great and brought the play to life. Their banter between each other felt real, making the character feel more fleshed out. The actors really made this play, and without their hard work the play would have not been nearly as good. It was obvious that the entire crew worked hard on this play. The props, costumes and the gorgeous set all helped the play be as good as it was. The enter crew put in a lot of effort, and it really showed.

This show was great and was different from other plays the Performing Arts Center has put on, as it is entirely a comedy. It never failed to make the audience laugh as the characters panicked their way around the situation. The plot, while convoluted at times with all the lies being told, helped to add more humor of the play. There was always something going on, on stage, meaning the play never bored or slugged on. The cast and crew truly put a lot of effort into this, creating a perfect show. While Rumors is no long being put on, to anyone who saw the play, it will be remembered as a phenomenal show.