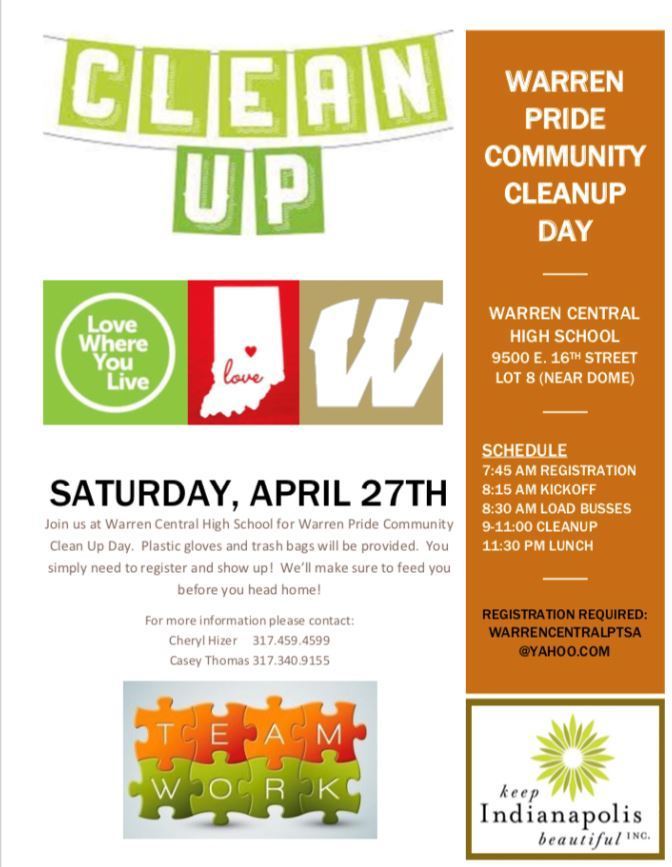 The WCHS PTSA has partnered with Keep Indianapolis Beautiful for the second annual Warren Pride Community Cleanup Day at the Warrior Dome on Saturday, April 27 at 7:45 a.m.

Over the past two years, 3.98 million pounds of litter has been collected off the streets of Indianapolis by people willing to maintain a beautiful city. This year, the PTSA is looking for more people to assist with collecting garbage from the surface of our city to reach the goal of a clean home. This event will display leadership by allowing anyone in the Warren community to volunteer in the Warren Pride Clean Up efforts.

“For this one day of the year, it becomes a little more manageable when we all come together for the common goal,” PTSA President Cheryl Hizer said.

As others may casually drive or stroll by litter left among the streets of their city, adults and youth, alike, working with Warren Pride, will work to show integrity by stopping and picking up the trash.

“Many times, residents see trash and would like to help, but it seems like an overwhelming task,” Hizer said. “The purpose is to bring together our community to clean up and show pride in our home.”

Youth across Indianapolis have found ways to contribute towards the cause by simply participating in events, such as the Warren Pride Community Clean Up Day. The largest youth group to participate, in previous years, are the Warren Central JROTC classes. All JROTC classes join together to participate in what they call a “Battalion Event.” The cadets disperse into various groups to participate, collectively. With an average cadet count of 150 cadets working, Sergeant Liddle embeds a positive mindset and persona into the cadets.

“I make it a requirement to teach the cadets unselfishness and that, even being a teenager, they can make a difference in this world. The Marine Corps is centered around teamwork, loyalty and duty,” Master Sergeant Vincent Liddle said.

Aside from the philanthropy work, those who participate find it enjoyable to be in each other’s company while collecting trash.

“Being surrounded by friends and fellow students during this event makes it seem like it isn't even work,” JROTC cadet Alexis Berry said.

This hands-on community event mentally prepares the youth to care more for the world around them. It is arguable that small acts of kindness affect the environment in immaculate ways. To everyone else, it may seem as if only a mere bit of trash covers the surface of our home planet, yet that is not the case.

“Just driving along, you don't get the full picture. Yet, when you have to pick it up, soon enough you've filled an entire trash bag but have barely walked a block,” Berry said “It might be something that you have to do consistently, but the effects are worth it. With our world the way it is, every attempt or effort makes a difference. One day a year where people pick up trash isn't enough to keep our community or world thriving, it needs to be a mindset that people live in.”

Those interested in participating are to RSVP by getting in touch with the PTSA at warrencentralptsa@yahoo.com or on Facebook at warrenptsa.