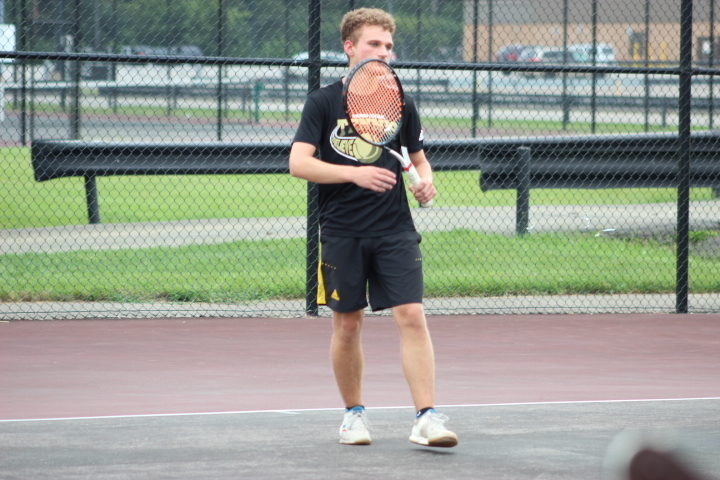 Senior Andrew Baker has been a standout tennis player for Warren Central since his freshman year, when he first started racking up wins and putting up big numbers for the tennis team. While his high school career is coming to an end, he does not plan on giving up tennis because of all it has to offer for him.

“It’s all about individualism, and it’s a sport you can play with you’re 60 or 70 years old, which is also why I like tennis a lot,” Baker said. “It’s made me mentally stronger, and it’s helped me with a scheduled routine and helped balance my life with work and being social.”

Although his success with the sport, Baker did not originally start his athletic career with tennis. He was first a baseball player and a soccer player before finally making the decision to stick with tennis in middle school, when his parents made him choose, and he says he has not regretted his decision.

“I would say that my biggest inspiration to keep playing tennis are my parents. They taught me at a young age that when you make a commitment, you stick with it all the way,” Baker said.

Another motivation to keep playing tennis also comes from his teammates. He particularly remembers one match during sophomore year when he was down 40-0 but came back to win after his teammates rallied behind him.

“They have always supported me through my rough times and my tough matches that I played,” Baker said. “They pushed me to keep on going.”

Even though Baker enjoys tennis and excels in high school, he does not plan to continue playing at the collegiate level. Instead, he plans on going to Purdue University and major in mathematics and quantitative finance to become an investment banker.

“I love playing tennis, but I’m thinking about playing it for fun rather than competitively.” Baker said. “I can’t see myself walking away from tennis completely.”