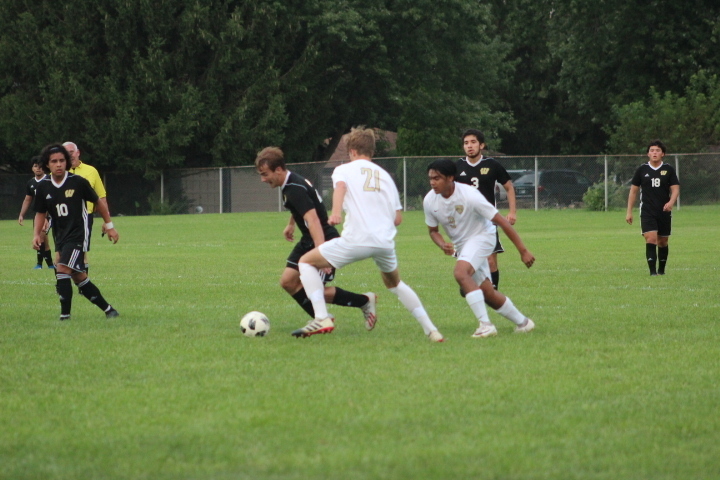 As the boys and girls soccer teams prepare for their first home game of the season on Aug. 23, they reflect on some of the issues they faced last season and how they can grow. They have set a few goals for themselves and are hoping for nothing but the best this season.

“Last year was a constant uphill battle, with lots of it being unsuccessful. We dealt with players getting used to new positions and also had to deal with lots of injuries from different players. This was a struggle, but we managed to deal with this through extensive practices and working on getting players used to a position they've never had experience with before,” senior varsity captain Kenny Gilbert said.

Gilbert has been on the soccer team here at Warren for four years, but he has been playing soccer for as long as he can remember. GIlbert has great amounts of faith in his teammates and wants to be the best leader possible.

“As a varsity captain, I feel that it's my job to keep the team together in even the worst struggles, and that I am a voice for everyone on the team. I think I bring a strong presence to the team, especially in defense,” Gilbert said.

This year, the boys have a new head soccer coach, Robert Pels, that is passionate about soccer and everything he can do to help his players succeed in the long run. All of the students are very excited about the new season and can not wait to see what opportunities their new coach brings.

“I share in our teams goals - which are championships. I think we can push for top spot in the MIC and compete for sectional and county titles, but we need to focus and work hard all season long to make this become a reality,” Pels said. “ I just want to see our kids succeed as a team. We have some incredible individual players on this team, but our team as a whole is so well rounded. If we can push each other to be the very best each of us can be, we're going to be a really tough team to deal with.”

Pels has coached many other successful teams at other high school soccer teams such as Cardinal Ritter and Lawrence North, but his most successful team was state champions Zionsville.

“Team chemistry and their willingness to push one another and hold each other accountable was so impressive. Every training session was so valuable because everyone pushed so hard,” Pels said.

Pels hopes his players are just as successful and can not wait to celebrate their wins this season. Soccer creates such a tight-knit community that he hopes everyone gets to experience.

“I would like to see my team accomplish working together more and our mentality getting better each day,” senior Dasjah Bost said.

Girls soccer had a few ups and downs last year such as adjusting to their new head coach, Courtney Burchett, and not having enough confidence in their abilities. This season they have higher goals for themselves and a coach who motivates them to do better.

“My favorite part about coaching is helping cultivate the player's talents and abilities and helping them to reach the goals that they set out for themselves and the team,” Burchett said. “I am looking forward to seeing how successful our team will be. The girls have worked really hard in the off-season and bought in to our expectations, and style of play, so we are highly anticipating seeing how that translates to games.”

Burchett’s most successful team was the 2017 Bishop Chatard girls soccer team. She described the team as being successful because they held themselves accountable, focused on achieving their goals and did not let anything get in the way of their success. Burchett is expecting the same kind of mentality this season and can not wait to see their successes.

“I am excited to reinvigorate Warren soccer and help continue to bring back soccer pride to the Eastside and re-establish a winning culture and tradition,” Burchett said.

For many students on the boys and girls soccer teams, soccer helped shape them into the person that are today. It encouraged them to keep pushing, they gained confidence, and they do not know who they would be without soccer.

Each member has something they can bring to the team whether that is positivity, strength, or leadership, and that is what is going to make this season great. They have tons of fun memories from last year, and they hope to keep making more as the year goes on.

“We want to win as much as we can this year, if there’s something to be won, we want to win it,” junior Eric Lezama said. “I personally want to win for the seniors. They have helped build the program and set a foundation for those that will come after us.”

"We have some really great games at home this year. Our team is going to be a lot of fun to watch and we really could use loud fans to cheer us on to victory,” Pels said. “We play some tough opponents at home - like our first game against North Central. We also play Center Grove and Pike at home. Our fans are the best and we promise to put on a show if you get out to see us.”