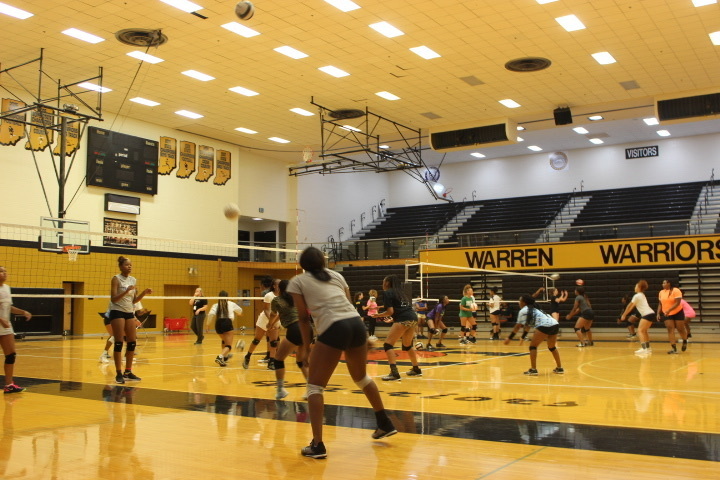 Setting Up For Success

After coaching a year of freshman volleyball at Warren, Coach Autumn Brown continues her teachings in the varsity league. With her upcoming, lots of new changes have entered the volleyball department.

“Everything is different. Tryouts, structured practices and communication has become more open,̈” said Brown. “The energy is completely different and everyone is excited to learn and is acceptive of our coaching staff.”

Even though it is Coach Brown’s second year coaching for the Warriors, she has been coaching for The Academy Volleyball Club for the past 2 years. She is also a special education teacher for Warren.

Brown is not the only new volleyball coach this year, the athletic department has hired other new faces onto the staff as well. Other than Brown, three new coaches were brought on staff. She wants to use the new people to bring a more relatable environment to the girls to give a more improved energy. Not only are there in-coaching and in-game changes, but there is also lots of team bonding that has developed including cookouts, attending scrimmages and occasional team lunches after weekend practices.

“My biggest goal is to improve the team culture,” Brown said. “By doing so it can make us all a better, stronger group.”

Aside from team culture, Brown also has high hopes for this year’s volleyball season including beating rivals Ben Davis, Lawrence Central and Carmel in this year’s MIC conference and going .500 in conference games.

Although Brown is the youngest head varsity coach in the state of Indiana, she has high hopes in what she wishes to accomplish over the next few years. She aims to use what she calls a three year vision. With build up and comfortability in the team within the next three years, she aspires to win the sectional title, which during that time she believes is attainable.

“I just love these girls,” said Brown. “When we see how happy they are on the court and when they’re together it makes the gym the happiest place to be.”