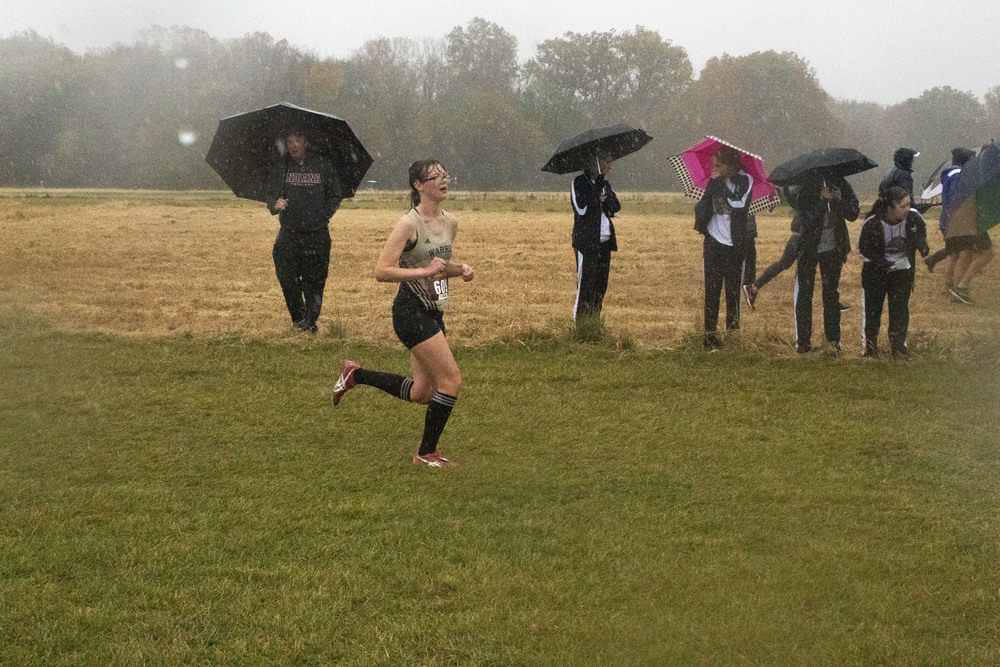 The Race To State

Running has become more of a lifestyle for this year’s Lady Warriors. Practices were lengthy and arduous and the hard work has prevailed in the teams closing meets. When such a considerable amount of dedication is present within a team, that same dedication should be shown on the track. This year’s team of Lady Warriors have put in the extra work needed in order to be successful during meets.

“I don’t think many people know how often and how hard we work. We conditioned every weekday of the summer at 7 a.m., and we come out as early as 5:00 a.m for morning practices and meets,” said senior Elisabeth Moss.

Moss started running in sixth grade and has just finished her seventh year running. As a frequent high finisher in meets over the past few years, Moss has been a successful runner during her high school career. Although it is not always easy, she continues to push through for herself and help lead her team.

“I continue to run because of the reward that comes from challenging yourself and setting high goals as motivation. The challenge is always there, but I’m learning that I can push my body more than what I thought was capable,” Moss said.

This year the girls have exceeded in pushing themselves further and harder than they thought that they could. On Oct. 12, the Lady Warriors traveled to Mount Vernon High School for sectionals. The team placed fifth place out of seven schools with confidence. After that,  during regionals at Benjamin Rush, they placed fifth out of ten schools. Finally, during semi-state at Blue River Park, the ladies placed nineteenth.

“Our seniors have each played a leadership role on our team. From their freshman year, our seniors have shown the ability to take initiative and go above and beyond in their workouts and race preparation,” girls head coach Brian Miller said. “Thank you to our seniors. You have meant so much to the program the last few years, and you will be remembered for all the things you contributed to our team. I will look to our younger girls to step up, take the reins of this team, and lead us to great heights over the next few years.”

This year, goals for the team consisted of ranking twentieth, which the girls accomplished when they received nineteenth. Primarily, the goal of making it to regionals was achieved with hard work and dedication from this year’s Lady Warriors. Moving forward, the team only plans to enhance their abilities more, and they have the confidence as well as support to do it. This season the girls have learned a lot over the course of the year through practices and meets. The girls plan on taking this knowledge with them in the future and use it to place higher in meets.

“I think a lot of girls have learned more about racing. At the beginning of the season many girls were inexperienced in racing and even running in general. Since then, they have grown and learned how to push themselves,” Moss said.

Warren Central’s boys cross country team finished their season by placing fifteenth at semi-state, improving upon last year’s finish of seventeenth place. Along with a higher semi-state finish, the boys regional results were the best since 2014.

The team’s overall improvement has not gone unnoticed to the runners, as several have placed higher in this year’s semi-state as well. Senior Keith Bye ran the fastest time at semi-state, 16 minutes and 44 seconds, and was the individual sectional and regional champion. Both junior Jacob Hartman and senior Zech Johnson earned All-Regional honors. Despite the teams’ few injured players, they have still shown great fortitude towards winning meets, and their mindset has stayed the same throughout the closing meets.

“As a whole, our team has improved massively compared to last year’s team,” Johnson said. “Our team has been hard at work this year and our meet results show.”

Johnson has been running since the sixth grade. Since then, his best finish was in the 5000 meter run with a time of 18 minutes and 12 seconds. Johnson has notably earned All-Regional honors.

“My main motivator is the feeling of getting better, there is nothing like seeing the results of your hard work after running a new personal best in a race,” Johnson said.

The team as a whole has kept a progressive attitude which has become quite observable from both the team and its supporters. During sectionals the team placed fourth and later placed second in regionals, showing improvement from last year’s results. By looking forward and thinking about what they can do better, the team is able to be on the same page and develop chemistry.

As the team has progressed with the season each player has become more aware of how to utilize their skills. Although the team has made improvements based on their strengths, they have faced obstacles as well, including losing meets due to injuries or a lack of experience.

“The team has also dealt with a lot of injuries, especially our top 7 to top 10 runners are either injured or have been injured this season,” said senior runner Justyn Hoke.

This evident abundance of injuries can be described as a barrier that has kept the boys from their best performances as there has been a significant loss of players due to injuries. However, the boys do not plan on letting these obstacles stop them.

“They definitely have more drive and the will to compete as the season has drawn to a close. This team is full of great competitors from top to bottom,” Hoke said.