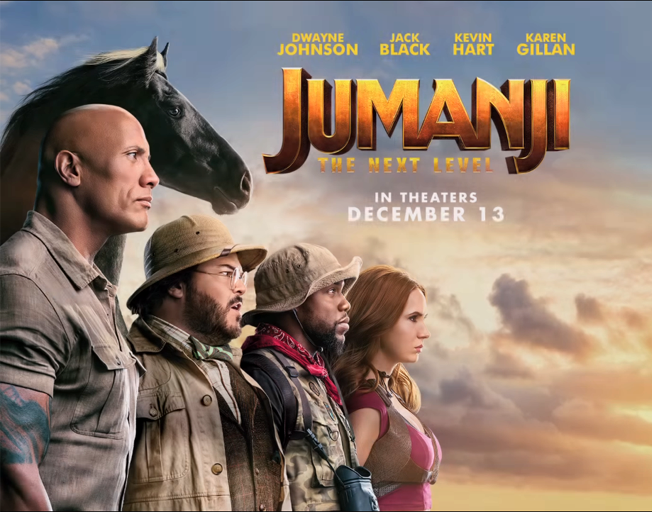 “Jumanji: Welcome to the Jungle” is a modernized reboot of director Joe Johnston’s 1995 movie “Jumanji.” In the original, when the main characters started playing the board game, they release a man named Alan Parrish (Robin Williams), and as the game progressed, they also released different creatures of the game into real life. The main characters played the game until someone won, which sent the animals back into the board game and set Alan Parrish free. In this remake, four high schoolers are sucked into a video game version of Jumanji, becoming the avatars that they chose.

The video game takes place in the jungle that Alan Parrish escaped from, but the stakes are high. To escape the game, they must survive the jungle and beat the game. The four main characters are Martha (Karen Gillan), Spencer (Dwayne Johnson), Fridge (Kevin Hart) and Bethany (Jack Black). When they are dropped into the game, they are told of a villain named Van Pelt (Bobby Cannavale) who stole a jewel from its shrine and gained the power to control animals which releases a curse on jungle. The Non-Playable Character that explained this to them escaped Van Pelt and had the jewel with him. The character then gave them the jewel and told them they had to put it back into the shrine, which was a jaguar statue. Although this would not come with ease. Van Pelt and his men attacked them, making it hard for them to release the jungle of curse it was put under. When they lift the jungle of its curse, they are released from the game. When released, they decided to destroy the game so that no one will want to play it again. This first movie, “Jumanji: Welcome to the Jungle” was considered good enough to warrant a sequel.

“Jumanji: The Next Level,” set to come out today, is a sequel to the “Jumanji” reboot. The trailer shows Spencer going missing inside of the game and Bethany, Martha and Fridge having to go back and find him. When they are sucked back into the game, Martha and Fridge discover that Spencer’s grandpa and his grandpa’s friend were sucked into the game as Bethany and Spencer’s characters while Bethany is nowhere to be found. This sequel seems to be filled with even more action and even bigger challenges since they leave the jungle. With the two granddads in the game, there is expected to be more jokes and a lot of things to laugh about. Their quest for this movie seems to be rescuing their friend Spencer. Overall, just from the trailer alone, this film looks like it will be a great one. Fans of the last one seem to have high hopes for this one considering the two new characters.

Rebooting any movie always seems like a bad idea, but the “Jumanji” reboots are great in the sense that they are not made for the nostalgia-seeking adults, but more for the newer generation. These movies shed a new light on the game of Jumanji itself and do so in a funny way. “Jumanji: The Next Level” seems like it will be a great sequel movie and is one to really look forward to.