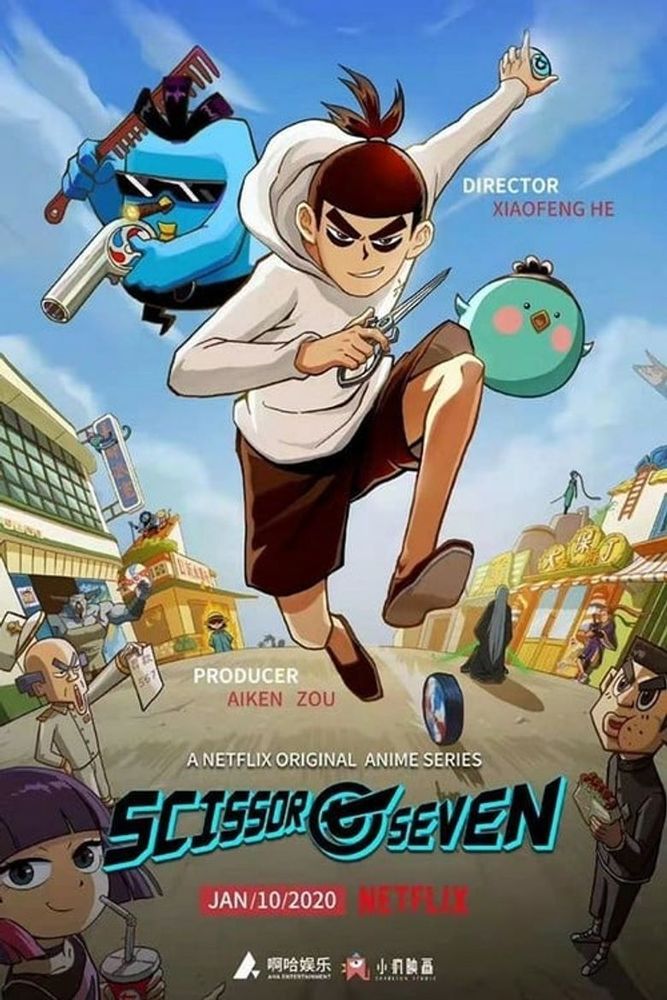 A cut above the rest

Netflix has released another anime, “Scissor Seven,” to its growing lineup of original series on Jan. 10. “Scissor Seven” is a short anime series that sets itself apart from the rest because it boasts a unique animation style, the characters are appealing to watch and drive the plot forward. This all pairs nicely with the refreshing plot the show brings to the table.

Animation in a show is everything; if a show were to blend with the rest, it could be hard to tell what is playing. If it is unique, it stands out and makes a name for itself. The animation style is a breath of fresh air from many of the styles of anime made today. Many new ones appear to be more edgy, flashy, colorful and smooth in the way the characters move and in the settings they are in. That is where “Scissor Seven” sets itself apart. Its animation style is very rounded out, the brushes they used look more rough, grainy even, which is appealing to the eye as shadows are not completely smooth. It also uses a Chinese animation style, rather than the typical Japanese style of animation. The movement of the characters is smooth and does not appear to be choppy, even in scenes where there is a lot of action. The animation makes this anime stand out among the other various series Netflix has released previously, but even the characters have their own qualities that make them shine.

The show follows Seven and his sidekick, Dai Bo. The pair make an odd team just by going off appearances. Seven is human and Dai Bo appears to be a blue chicken who can do just about anything a normal person could. Seven has no memory of his family, where he came from or who he really is, but he can wield a pair of scissors like nobody else. He displayed that quality from the first episode when he made beef stew at his food stand with an impressive display of skills. He cut through all the ingredients in the beef stew without even touching the scissors.

Dai Bo has a mind for business and making money, he also is a great inventor. It was his idea that gave himself and Seven a job at the food stand they own. Dai Bo shows off his impressive inventing skills in the first episode of the series with his invention intended to shape Seven into a successful hitman. It is called the GaiBa Egg. The holder of the GaiBa Egg has to think of what they want to transform into and break the egg. They will then turn into what they had in mind. We see Seven use this successfully when he turns himself into a female blue chicken just to mess with Dai Bo. It is Dai Bo’s eye for business that gets the ball rolling on the plot as he encourages Seven to become a hitman instead of running the food stand.

The plot of the show is one of a kind because of the way they execute it. Seven had his work cut out for him when he decides to go along with Dai Bo’s plan to have him become a hitman, despite it being an illegal job. Dai Bo coaxed him into the plan after saying they could be professional killers and that the benefits of the job would be having flexible hours, opportunities for travel, solid benefits and could make them the million dollars they would need to go to Stan and recover his memories. Seven is quick to go along with the plan and does so by taking offers. Seven’s weapon of choice is unusual, as he uses the last object anyone would think to use as a weapon: a pair of scissors. While the show has its moments of being serious, it still manages to be hilarious with plenty of adult humor being thrown into the mix. These qualities all make the show shine amongst other anime out there.

“Scissor Seven” hits all the bases for anime viewers new and experienced with their unique use of animation, the characters being appealing and well rounded and the plot not being something viewers have seen a million times over. It earns a 5 out of 5 stars overall and it highly recommended for those who like a good laugh and even those who may just be getting into anime. “Scissor Seven” currently has 14 episodes and can be streamed only on Netflix.