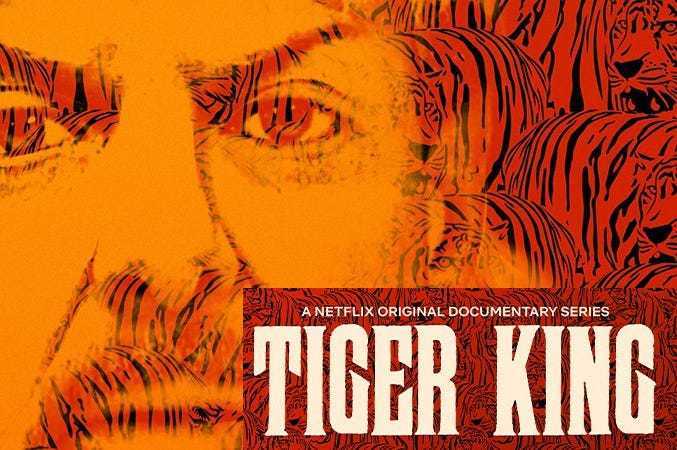 “Tiger King'' is a Netflix Documentary series that focuses on the infamous Joe Exotic and his bizarre underworld where he breeds big cats. This docu-series was released March 20, with a total of eight episodes plus one additional episode which was later released April 12, 2020.

Joseph Allen Maldonado-Passage, also known as Joe Exotic, the mulleted, gay, big cat owner, had his own zoo with 200 captivated tigers, which he illegally bred. He not only decided to be a zoo owner, but also ran for President of the United States and later Governor of Oklahoma. Carole Baskin, big cat-rights activist and CEO of Big Cat Rescue, a non-profit animal sanctuary based near Tampa, Florida, was a woman determined to shut down Joe’s zoo. Carole was familiar with Joe when his zoo became exposed to the internet. She studied him, researched his zoo and was determined to shut it down when she saw the horrible environment the tigers were placed in. She was eager to sue and throw him in jail, but Joe did not like this. He started posting threatening videos and even created a company that mimicked Big Cat Rescue’s name and logo, for which Maldonado-Passage lost a million-dollar trademark lawsuit in 2011. This caused Joe to retaliate. He later paid and hired a hitman for $3,000 to kill her in hopes to get Carole off his back.

Throughout the series, some episodes show Joe Exotics' crazy obsession to destroy another cat owner, Carole Baskin. Both are equally seen as insane for having big cats captivated in tight spaces. Carole Baskin was introduced to the big cat life when her former husband, Don Lewis, held all types of exotic animals. Such as monkeys, lemurs, tigers, and more. With all the feud about whether Carol Baskin killed her husband or not it has taken a toll on the internet. In the documentary, it is said that Carole was arguing with her late husband, Don Lewis, before he went missing. Many speculate that he did not disappear, instead was fed to tigers so Carole could inherit his money. The show had no way or form to further the allegation of Carole Baskin killing her husband, but many fans that were on Joe Exotic’s side took it upon themselves to come up with a “meme phenomenal” that Carole Baskin did indeed kill her husband and fed him to tigers.

The series makes sure to highlight each person that worked for Joe at his zoo in Oklahoma. In the last episode, there was an interview by Joel McHale interviewing all the people that had worked for Joe at the time. One of the many questions McHale asked was if the staff was loyal to the tigers or Joe Exotic. Many answered that they were loyal to the tigers. Zoo Keeper Kelci Saffery had actually got her arm bit off by one of the tigers at the zoo and when asked if she regretted it, she answered no. Many of the workers there were not against Joe Exotic until he was sentenced to prison for 22 years, yet they also agreed that he deserved it.

The feud between both Joe Exotic and Carole Baskin turned into criminal matters. Joe got caught up in his criminal “business” of trying to destroy Carole Baskin, quite literally. A man named Allen Glover, a friend of Jeff Lowes, was hired to go follow Carole Baskin and her current husband Howard Baskin in Florida where they had lived. Jeff Lowe was known for betraying people. Those who worked for Lowe even stated witnessing Lowe tell people that they cannot trust him. This backfired on Joe. James Garretson, a “friend” of Jeff Lowe as well, got involved with the authorities, betrayed Joe, and got him in jail. The irony of it all is Joe ending up in a cage behind bars just like his 200 big cats were.

The rating for this Netflix documentary series would be a solid 9 out of 10 stars. This series is one of Netflix top 10 series of the year because of how it has changed documentaries forever. We got the bad, good, ugly and terrifying side of Joe Exotic and his underworld of raising all the big cats his whole life. We get to see the life of a man completely go downhill. There was no happy ending for Joe Exotic, there were no heroes in Tiger King. And yet, viewers will know this series as a pop-cultural imagination. All the memes surfacing the web are only feeding into Joe Exotic’s ego as that was his holy grail his whole life, his fame had finally been gifted.