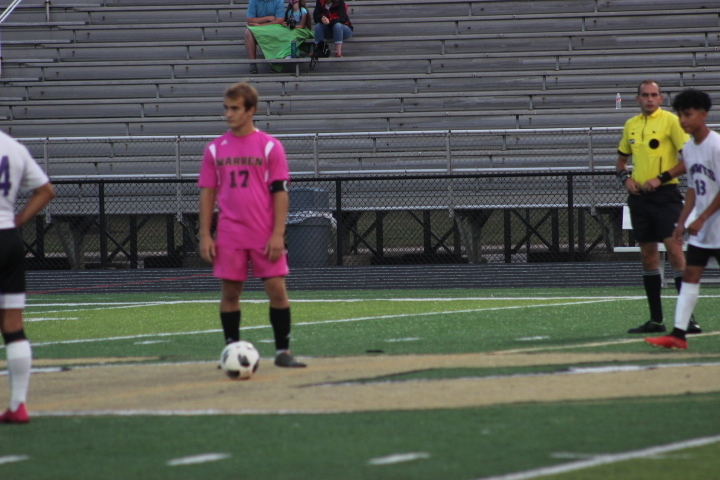 Senior Varsity soccer captain Gabe Wells has shown excellent leadership in both soccer and school. With a cumulative weighted GPA of 4.012, being in the top 20 of the senior class rank and making it to the varsity team his freshmen year, Wells has made quite the name for himself.

The season started off in a different way than they anticipated. The development period to practice was cut short due to COVID-19, but the team has adjusted well due to the leadership of captains Wells and Eric Lezama.

“While our record doesn't quite show it, the season has been far more successful than I originally predicted. We graduated a lot of seniors last season, so I had few doubts, but a lot of players have really stepped up and surprised me immensely. The biggest goal during the season is just improving so we can get to where we need to be by tournament time,” Wells said.

Wells comes from a soccer family and started playing at the early age of three years old. Both of his parents and his three sisters play or played soccer, and his parents decided to sign him up at the age of three.

He started on the Warren soccer team, which plays in the fall, but is now also involved with the club, which combines students from different high schools into one team to compete in the spring. In club alone, Wells was part of a team that was a State Runner-Up, US Club Soccer Regional Champion, US Club Soccer National Semifinalists, top soccer division in Midwest, and defeated 3-time national runner-ups last season.

“[Soccer is] a big deal to me. I am very competitive so I take every game and practice seriously. I don’t like letting other people think that they are better than I am or better than my team is, because we’ve worked hard enough to prove ourselves,” Wells said. “ I don’t like losing and I’ll do whatever it takes to make sure we win.”

“My biggest regret for school is just losing focus/work ethic in a couple of my classes. If I just stayed more focused and did my work, I could have stayed as a Top 10 student; however, I began slacking off for a period of time and it cost a little on my GPA. Looking back, if I knew just how worth it studying a little bit more would have meant, I would have definitely worked harder,” Wells said.

Before Well graduates, he wants to make the most out of his senior year and continue inspiring his teammates to do better.

“I just try to remind all of the players how successful we have been this season in comparison to previous teams at Warren Central. We've made a historic mark on the soccer program already, so I just have to keep reminding people to keep their heads up and focus on the next game. We have to learn from our mistakes, but we shouldn't dwell on them so much that it affects our performance. We have bigger things ahead, so don't focus on what is behind us,” Wells said