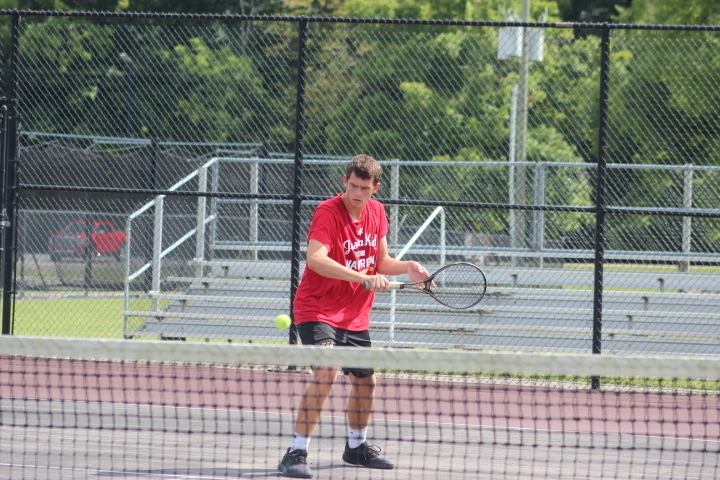 The Will To Succeed

With all the commotion this year, one thing everyone can look forward to is bonding over sports.  Matchett has been participating in multiple extracurricular activities for the past eight years of his career, they have proven to be effective in molding who he is today.

“I am on the track and field team, and I have been throwing discus since freshman year. This sport has also been a great experience for me; so many great coaches and teammates, and discus is such a unique sport,” said Matchett.

Matchett has been playing tennis since he was just a fifth grader at Creston Middle School. Since then, he has continued to make an impressive impact, especially here at Warren, with his varsity spot on the tennis team as well as his discus spot on the track team.

“I would love to continue playing in college, but where I am planning on attending I don't think I am at that level [necessary]” said Matchett.

With a 3.8 GPA and his participation in tennis, track and field, and WCTV, Matchett has been making a good impression on those around him.

“The most impactful experience I've had while playing tennis is losing. I have lost a lot in my four years at Warren, and my coach this year has told me a million times that winning isn't everything,” said Matchett.

So far this season, they have accumulated a record of 0-1, taking a loss against Lapel, however, this has not stopped the team from progressing further.

“Warren Central Tennis has given me the opportunity to move past that 'I have to win' phase in my life. It is hard to win, especially in the MIC Conference, when you have half of the teams ranked in the Top 25 in the state,” said Matchett.

The most important thing while participating in any type of competitive sport is the amount of dedication required, and there has been a distinctive level displayed by Matchett.  Even while they are currently going through a rough period with their win loss ratio, he does not seem to be stopping his work ethic.

“Right now, the toughest challenge has been approaching the end of my senior season. This team and program have meant so much to me over the past four years, I really don't want to see it come to an end. And I am doing my best to make sure this season doesn't come to an end earlier than the last three seasons,” said Matchett.

The commitment shown over the past eight years proves that there is no doubt he is giving it his all, especially with it being his last year at Warren.

“I would like to give huge props to Coach Pride and his coaching staff for coming into our program this year and totally changing the mindset and culture. They have helped me grow so much as a player and a person in their short time here at Warren,” said Matchett.

After the boys went without a coach for the first four weeks of practicing, they finally were able to get coach Dell Pride to step in and help. Since then Pride has made a significant impact on Matchett, helping him improve and take himself to the next level.

“What really sets you apart from other players and schools is how you bounce back from those tough times. Just pick up your feet and move on to the next match, that is all you can do,” said Matchett.