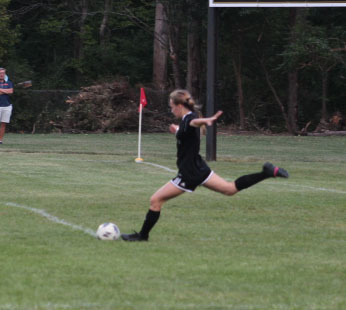 Despite an unfortunate losing streak, the Warren Central’s girl’s soccer team is still pushing their way through with the hope of ending on a successful note. Their season started later than they hoped due to COVID-19, but are doing everything they can to keep players safe so they can continue their season.

“We take things on a day by day basis. As of right now, we are lucky enough to not have been directly impacted by COVID,” head coach Courtney Burchett said. “We conduct the daily mandated pre-practice COVID screenings, and do our due diligence in ensuring the health and safety of our student-athletes.”

The team is practicing staying safe throughout practices as well as games, but COVID-19 has not stopped them from playing hard this season. Usually, students would have practices during the summer to prepare for the season, but that time was shortened until senior captains Ruby Dollar and Jenna Keatts hosted practices at home.

“We weren’t able to start as soon as we had hoped so and we weren’t able to do contact practices until about mid-july,” Dollar said. “The other captain Jenna [and I] hosted our own practices off of school grounds for girls to come to help get them ready [for the] season.”

One thing the girls need to work on is keeping energy and effort consistent throughout the game. This year, the team is fairly new and has a lot more freshmen and sophomore players this season, considering they had quite a few seniors graduate last season. The team is really good at giving it 100 percent in the second half of the game, but during the first half players are not playing as hard as they are expected to.

“The girls have been working extremely hard to prepare for the season. We have two very talented seniors who are great leaders for us, Ruby Dollar and Jenna Keatts, and they have been dedicated to ensuring the success of the team this season,” Burchett said.

To keep team players spirits high during this season, the captains are more focused on the present rather than what could happen if the season got canceled due to COVID-19. Their season was not too badly affected by COVID-19, but they did lose a lot of practice time during the summer, and that is reflected in the way they play.

“I am very excited about the potential of this team. The team's positivity, work ethic and tenacity has really played a huge role in our development and I look forward to seeing us continue to grow and be successful this season,” Burchett said.

Ultimately, the team is looking forward to the growth and development they have as players this season, but are also continuing to keep a positive attitude, with the hope of having a successful ending season.