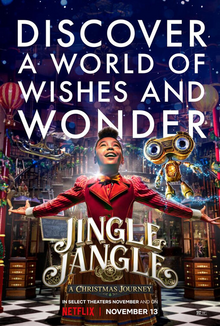 The Invention Of Jeronicus Jangle

Jingle Jangle is a beautifully made Christmas movie, with visually stunning graphics, a well written story, a lot of beautiful songs,  funny moments, and a beautiful lesson.

The graphics in this movie are spot on, with every scene it appears in. For example,  how Jangle’s and Journey’s Gift is viewed as a bunch of circular blackboards. Another piece of notable graphic work is the inventions that Jangle made that require belief, like the necklace that Jangle gave Jessica when she was young, giving it light in the power compartment showing how strongly she believes in Jangle.

The movie begins with a man named Jeronicus Jangle, the world’s greatest inventor and toymaker, known far and wide by the people of Cobbleton for his inventions. The reason he was so famous is because of his surprising ability to see the formula for a toy so that it works as it should. He made toy after toy while saving the best one for last, a toy matador. He spent months working on the toy and was nearly finished, he just needed one last piece, and the movie started with the day the part arrived. As soon as Jangle received the piece, he went straight to his workshop and got to work. Jangle called the toy his “Greatest Invention Yet” because of the last piece, which allowed the matador to walk and talk, as if he came to life. As soon as the matador came to life, he was shocked to hear that Jangle was going to mass-produce him and sell him all around the world. The matador thought that, since he was Jangle’s first toy to come to life, he was one of a kind. So Don Juan convinced Jangle’s apprentice, Gustafson, to steal him and Jangle’s book of inventions. Jangle was heart-broken that his own apprentice betrayed him. Soon after, he went into hard times, as everyone waited and waited to see his greatest invention but he couldn’t prove he had one because his book held the plans for it and it was stolen. Then after a while, his lovely wife died, making him vow never to invent again.

Fast forward a few years ahead, and Jessica, Jangle’s daughter, decided to send her daughter, Journey, who had Jangle’s biological gift, to him. When Journey arrived at Jangle’s workshop, it was sadly reformed into a pawnshop and Jangle was just a simple tinkerer.  Journey tried everything to get Jangle to get back into the inventor spirit, but nothing worked, so she decided to enlist Jangle’s help in fixing the Buddy 3000, which was a flying robot that Jessica made when she was a child. She did this in hopes of proving to Jangle that he still had what it took to be a great inventor.

Meanwhile, Gustafson sold every invention out of the book, making it look like he made them. But, when he got to the end of the book, he decided to try and sell his old invention: The Whirly Twirly, which was a failure. Disappointed by his failure, he went back to Jangle’s old workshop to steal Buddy 3000. Gustafson knew that he couldn’t just steal another invention without someone noticing, so he called the police and lied to them saying that Jangle stole the Buddy 3000. But Journey knew that Gustafson didn’t make the plans for it, so she wrote on them: “Property of Jangle” to prove he made the robot.

The movie itself is an absolute masterpiece for all ages, as for example, made better by the beautifully made songs. Some of the songs featured in the film include: “Over and Over”, “Magic Man G”, and “Square Root Of Possible.”

In addition to the beautifully made songs, the film presents countless comical moments. For example, in multiple parts of the movie, the matador slaps Gustafson in the face like he’s a fully grown man.  Another funny part of the movie is when, during a snowball fight the whole town gets into,  Jangle throws his snowball, but instead of it hitting Journey, it hits a police officer in the face, and he immediately holds his hands up like he was going to get arrested. One last funny part of the film is when, at the end, Journey shows the plans for the Buddy 3000 with the invisible ink, The matador, instead of trying to steal the invention when no-one was looking, decided to play the innocent part and betray Gustafson, but when he was back in Jangle’s hands he was immediately reprogramed.

The movie even tells the viewers a beautiful lesson, saying that even through loss, you can still be good at what you do. For example: Jeronicus lost his desire and ability to invent, but Journey showed him that he must believe again to find his power to create.

From the story to the songs, this movie is the perfect choice for a fun, beautiful, heartwarming experience for Christmas and is a must-watch for everyone, The film is available on Netflix and earns a 5 /5 rating.