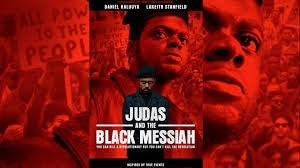 Black History Month is a time when all learn of the hardships, successes, plights, and goals in the African-American community. So, with this in mind, a new movie was made for Black History Month, “Judas and the Black Messiah”.

Judas and the Black Messiah starts with William O’Neil, a petty criminal, in prison, being offered a free ticket out, in exchange for intel on Fred Hamptom, the Chairman of The Black Panther Party. He reluctantly agrees, and goes undercover. William does as he was told, gaining information on the chairman, but as he goes throughout The Black Panther Party’s rank ladder, he starts to grow a bond with the people in it. Soon, his bond towards the Black Panther Party is like that of a family.

He then remembers the job he was given by the FBI, and just as he remembers, he is instantly placed in between the cross-hairs of two very big decisions: Would he betray the Black Panther Party, revealing information about their chairman, causing him to be assassinated, or betray the FBI, keeping the info on the B.P.P to himself, and risk his chance of freedom?

Daniel Kaluuya, the actor who played W’Kabi in the movie “Black Panther,” is a perfect fit for Fred Hamptom. Both have the same frame, size, and the same skin tone.

As this movie is based around a date where racism and racial segregation was still legal, so it is expected that this movie may contain scenes revolving racism and police brutality. Besides the obviously expected racial acts, this movie may be a blast for both the young and old, appearing in AMC Theaters and Cinemark Greenwood Theaters on February 12.