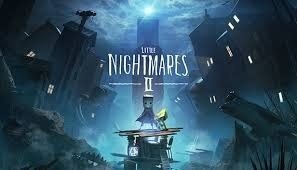 Players have waited for a sequel to “Little Nightmares,” and the creators of BANDAI NAMCO have successfully delivered. “Little Nightmares 2” is a new, fresh take on the horror game that started it all, with a new hero, an old ally, and a dastardly new villain.

The story of horror begins with a boy named “Mono,” a child on a forgotten isle, distorted by the transmissions of a signal tower under the control of the main enemy of the game, The Thin Man. This tower is no ordinary tower, as it not only controls the populace of this isle, but turns them into bloodthirsty monsters, hungry for living flesh. Mono is not alone on this dangerous and risky adventure as some had hoped, as he is joined by an old friend: Six, the cannibalistic, demonic, yellow raincoat cladded child from the first game that single-handedly escaped “The Maw,” a man-made island designed as underwater 5-star resort for the wealthy and powerful elites in the world. She also defeated “The Lady,” a woman who had the ability to siphon the youth from children, keeping herself young and beautiful, whilst turning the children into Nomes; small, blank slated beings that aid Six throughout her journey throughout The Maw.

As any Little Nightmares fan should know, Six and Mono are gifted individuals, each with their own abilities and powers. Not much is known of Six’s abilities besides her dark magic. But, thanks to some sculpting artist, they made a statue of Six and Mono, only except that Six appears to have taken the form of one of the previous members of The Maw, “The Janitor,” a long-armed, short-legged, blind monster that Six defeated by chopping off it’s arms with a pullback door. As for Mono, his ability to teleport to anywhere by stepping through television is very much so ironic in the sense that the Isle that the pair are on is littered with T.V. 's nearly everywhere.

Six’s appearance looks identical to her original design, with her yellow raincoat with a triangle hoodie, no shoes or socks, and white pants underneath. Mono, on the other hand, wears a brown button-up shirt, brown pants, a forest green trench coat that is always open, and a brown paper bag with eye holes cut into them. Neither Six nor Mono has ever been seen in-game without something covering their face, but, thanks to fan art from a variety of artists, the Little Nightmares community has a few ideas as to what they look like. Six, without her hood, is shown to have surprisingly well-kept hair with her bangs covering her eyes. Mono, without his paper mask, appears to have wild, rizzled hair which has grown to be around the size of an afro.

One expectation players have for this game is that it has a multiplayer option so that they can play the game with friends. Another is that in the multiplayer option, players can play as The Runaway Kid, a character in a DLC in the first game if three people are playing.