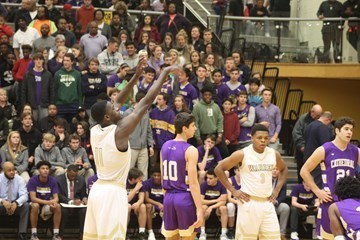 WARRIOR BASKETBALL TEAM PROVES TO BE FORCE IN INDIANA

The undefeated boys basketball team has started their season strong, competing against opponents from across Indiana. Looking to continue the success of last season’s record-breaking state championship, the boys are pushing for strong leadership and technique to remain consistent throughout the winter season.

With two transfers from local schools, seniors Manuel Brown Jr. from Scecina Memorial High School and Isiah Moore from Park Tudor, the Warriors are starting with a team full of new faces.

“[Manny and Isiah] are doing a good job at adjusting,” senior Jesse Bingham said. “We’ve come a long way from when they first came.”

In their daily practices, the Warriors focus on fundamentals and in-game situations to prepare them and aid in their success on the court. With daily practices after school, the boys basketball team is expected to put in hard work, energy and leave nothing on the court.

This year’s seniors fill different leadership roles that know what it takes in order to be successful both on and off of the court. With experience playing against formidable opponents, the seniors know that hard work is the first step to being able to be extrusive in not just in the Metropolitan Interscholastic Conference, but also in the state of Indiana.

This hard work mentality was shown to be a key part of the team’s success last year, when Warren Central basketball had a record breaking season, going undefeated and beating a top-ranked opponent, Carmel High School.

The Warriors have became a common topic in articles across Indiana and are currently ranked first in the state.

“We want to repeat that same success again this year,” Bingham said.

Last year’s state title motivates the team to work harder and not to take any game too easily. Varsity head coach Criss Beyers keeps the expectations for the team high and is always looking for things that the Warriors can improve on during practices.

“We’ve done a lot of good things in [the games we’ve played]. But those things have also shown us what we need to work on and what we can correct,” Beyers said.

During the season and home opener, the Warriors took on the Arsenal Technical Titans won with the score of 100-28. The following game, they took on the Franklin Central Flashes taking home the win with a score of 52-28. On Dec. 7th, the Warriors played Cathedral High School, winning 69-47 and improving their record to 3-0.

“We have the chance and opportunity to be very good like we were last year,” Bingham said. “We just need to chop away every day and make the best of our season.”