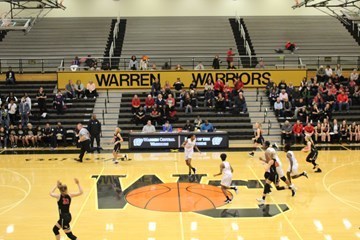 OFF TO A STRONG START

The girls basketball team has been off to a strong start, with a record of 10-1 overall and 5-0 against conference opponents.

The Lady Warriors credit their success to their toughness, confidence and ability to stay humble despite being the reigning champions.

“Knowing where we came from and the dedication and work it takes to have success,” head coach Stacy Mitchell said.

The ladies have been strong on both ends of the floor this season, averaging 63 points a game while holding opponents to 40 points a game.

The chemistry of any team is important, along with good teamwork, and it is an aspect of the sport that the Warriors have mastered.

“Chemistry is everything,” senior Shaila Beeler said. “No one person can do anything by themself. We play as team.”

The team still remains undefeated on the road in wins against Cathedral, Mount Vernon and conference rival Ben Davis.

The Lady Warriors have been led by Beeler throughout this season. Beeler has done a lot for the ladies this season, averaging ten points, eight assist and three steals per game this season.

“Coming off our state run last year gave me momentum,” Beeler said. “We have a huge target on our back this year, and I’m trying to make it back to state again.”

Beeler has missed three games due to injury, but the ladies’ stacked roster has done well in her absence with senior Cydni Dodd averaging 11 points, five assist and one block a game and junior K’Ja Talley averaging a team high 12 points per game.

The ladies only loss of the season came against Pike in the county tournament and they are using that loss as a learning experience for the future.

“We have had time to regroup and realize if we’re going to be successful we have to play hard 100% of the time,” said Dodd.

The team hopes to be at full strength for the remainder of the season as Beeler came back into the lineup in the game Wednesday against Crispus Attucks.

With the rest of the season still ahead of them the team looks to remain focused on their future.

“We’re not undefeated like how we’d like, but we’ve learned a lot about ourselves,” said Dodd. “We plan to continue to play hard and let the wins and loses be determined by how hard we play.”