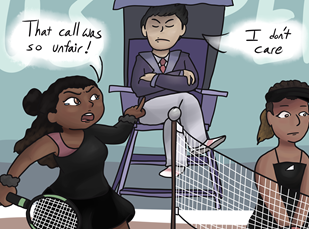 On Sep. 8, 2018, the final match of the Women’s Single division in the US open took place between famed United States tennis star, Serena Williams, and up and coming Japanese newcomer, Naomi Osaka. This match was an intense game with both players playing well, but Osaka taking the lead, in terms of points, against Williams. During the match, Carlos Ramos, the referee for the game, gave Williams a warning after seeing Williams’ coach, Patrick Mouratoglou, attempt to coach Williams during a game. While coaching during a game is against the rules, penalties are seldom given out for it.  This caused Williams to start to get upset. After disputing the warning, Williams threw her tennis racket to the ground during an argument with Ramos and called the referee a “thief.” This resulted in Williams getting a second and third warning, causing a game to be taken away from her, destroying her hopes of winning.

After this event, controversy arose as to if Williams was in the right or the wrong. A few days after the match, Mark Knight, an Australian artist, drew a comic for the Herald Sun about the Serena Williams debate. Immediately after being published, this comic received heavy backlash because of its racist depiction of Williams. Williams was drawn as a stereotypical large black woman, reminiscent of racist black caricatures commonly seen in the early to mid 1900’s. This was not the only part of the comic criticized. In the background of Knight’s comic, Osaka is portrayed as a white woman with blonde hair, despite Osaka being half Haitian and half Japanese.

In this issue’s Picture This, I have drawn a comic that attempts to more accurately represent not only the events of the match, but also the people involved.