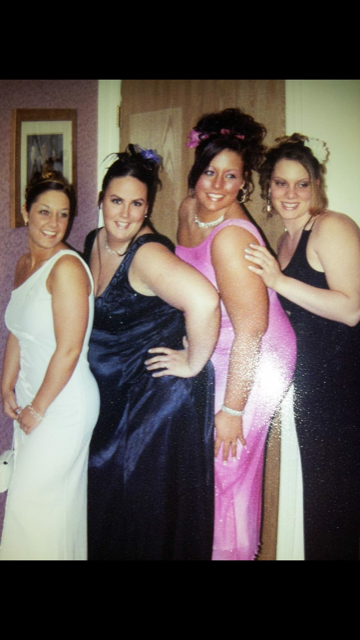 Prom Fashion over the Years

It has reached that time of year when all teenagers can think about is that one special night. A night that most consider a rite of passage. A night filled with endless dancing and enjoyment--prom. Prom, short for promenade, marks the end of the school year and celebrates the upperclassmen. Students hunt down the perfect dress or the right tuxedo. This tradition dates back to the 19th century, when universities held lavish banquets to commemorate their graduating students. In the beginning, these gatherings were also seen as a way to promote etiquette, while also showing off social class. By the 1930’s, Prom became an annual rite of passage in American high schools. Each prom typically featured crepe and paper decorations, music and entertainment from a live band playing on stage, dancing in a school facility and refreshments. Basically, everything that is depicted in the movies. By the 1950’s, after trying times such as World War II and the Great Depression, Americans had more spending money and time for fun and relaxation. This resulted in more extravagant proms, typically held in country clubs and hotels with more elegant decorations, photography and limousines.

The 1960’s: the time of anti-war protests, the Civil Rights Movement, Marilyn Monroe and drive-in movie theaters. For a teenage girl in high school stressing about Prom, the biggest thing on her mind was most likely which pastel color to choose and how high she should wear her hair. Fashion in the 60s is known for elegant shift dresses that descended down to the thighs. The common styles for prom included long owing chiffon dresses ranging in a variety of pastel shades and colors. The dresses were focused more on elegance and grace. The majority of the girls had dresses with an empire waist, which were high-waisted and helped hug the girl’s figure. To style their hair, females typically wore big poofy hair called beehives and bouffants. The bouffants were also known as the “Jackie Kennedy” because she popularized this hairstyle while her husband, John F. Kennedy, was in office. Many looked up to her and her style and therefore wanted to imitate this time consuming hairstyle, especially for special occasions like prom. The beehive was a similar style and the only difference was that they were larger and typically required an entire can of hairspray for the style to last. Fashion for men in the 60s was still conservative and involved dressing up in button downs, dressy shoes and either a suit jacket or an ivy league styled shetland sweater. For prom, male students wore black or simple nude-colored formal tuxedos and their best dress shoes to match the ensemble.

The 70s was a decade of flower power, David Bowie, double denim, Star Wars and hippies. This was the time period when people weren’t afraid to make statements and women were less restricted on what they could say, do and wear. In the fashion world, new things such as platform shoes, trousers and rock t-shirts became trends for both men and women. The women’s hairstyles also went from being conservative and elegant to more loose and outgoing. The prom fashion highly reflected the trends of the era, especially the bohemian hippie trend. Dresses had adopted a sack shape, which typically had an empire waist accompanied by a long maxi skirt and long sleeves. The common theme among these dresses was that they were long, flowy and made of lace or sheer material. They still adopted the pastel colors from the 60s, but the majority of the dresses were covered in colorful oral designs. The male students were also a part of the hippie trend and were seen wearing tight collared shirts with multiple designs and colors such as plaid. A typical prom ensemble for male students consisted of different bright colored suits and tuxedos. These outfits were commonly paired with frilly tuxedo shirts that were either white or matched the color of the suit or tuxedo.

The 80s can only be described as a time of bold fashion, shiny metallic colors and shoulder pads. The fashion trends became more over the top and risky, with people wearing shoulder pads and bright, shiny, metallic colored clothing to stand out. The prom fashion was nothing shy of bold and outgoing. Many of the dresses were decorated with shiny sequins, bows and large ruf es. Dresses were more revealing and were commonly sleeveless or had large ruf ed short sleeves. Hair during this era was an interesting spectacle to observe, especially when the styles were exaggerated. Girls typically crimped their hair to make it curly, puffy and stiff. Hairstyles varied in different curly styles pulled into heaping twists and curls on top of their heads. During this time, more girls started wearing heels to special occasions, and prom was no exception. Typically, they wore small white satin heels to match with whatever colored dress they were wearing. The boys, on the other hand, continued the trends of the frilly ruffled shirts and pastel colored tuxedos but also included oversized bow ties. Some students wore an all black tuxedo with matching Ray-Ban’s.

The 90’s era brought with it “Titanic,” pagers, Madonna, overalls and the “Fresh Prince of Bel-Air.” By this time period, society was much more advanced in technology, fashion and people were more open minded when it came to controversial issues. For example, women had more freedom to wear what they chose to, same-sex relationships became more accepted and multiple cultures were celebrated. Prom became an even bigger deal and was used by students to express their individuality. Girls wore sleek skin tight dresses with slits along the thighs and completed the out t with kitten heels. The accessories included velvet or dark jewelry, chokers and pearls and hairstyles were more based on updos and side parts. Suits and tuxedos that were once designed baggy for men became available in slimmer fits, therefore the majority of the male students would have been seen in sleek black and white suits and tuxedos with ties and bow ties that matched the color of their date’s dress.

Fashion in the 2000’s was influenced by pop culture and the fads that celebrities came up with. More people paid attention to what they were seeing on television and what their favorite actress was wearing. People commonly imitated the styles that they saw on television and in magazines. Clothing for both men and women became more colorful, shorter and showed more skin. There were more choices for prom dresses including color, style, material and event. Spaghetti straps and updos with flowers and jewelry in them as well as multiple bright colored dresses were the typical trend in clothing. Many of the girls wore sleek bright colored dresses with spaghetti straps, styled their hair in updos, put flowers and jewels in them and paired their outfits with a smoky eye and nude colored lipstick. The late 2000’s was also the era of the duct tape prom ensembles, when couples would create their dresses and suits out of multi-colored duct tape. While there was a variety of choices for females, there were not very many for the male students. The difference between the clothing in the 90s to the 2000’s is that suits and tuxedos were offered in even more colors and had a tighter fit. Young men also enjoyed wearing shutter shades and even added their own simple necklace or earring to accessorize.