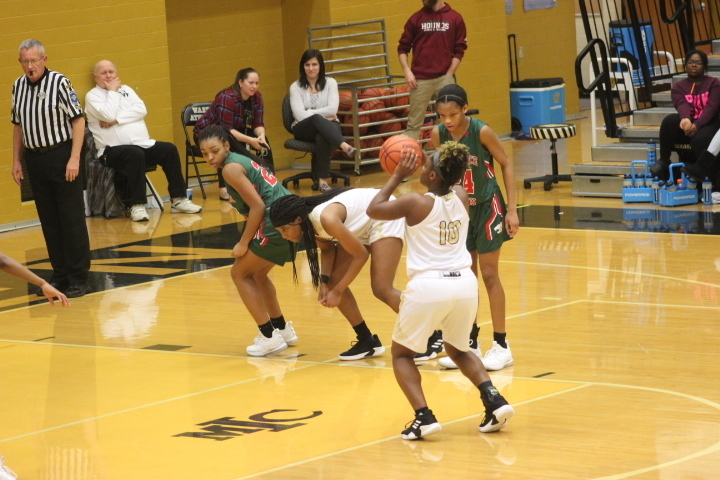 On Tuesday Jan. 29, the girls took on the North Central panthers in sectional play and came just short of advancing to the next round. After cutting down North Central’s lead before going into the fourth quarter, the ladies were unable to pull ahead, eventually losing the game by a score of 39-41.

“It is definitely heart breaking when your hopes are so high to go back to the state championship, but we did what we could and we made a championship out of the girls basketball program and we will always be remembered. That’s all any high school basketball player would ever hope for,” senior point guard Shaila Beeler said.

Throughout their season, the basketball team fought hard against various injuries and adjusted to new players filling new roles on the team. They were able to finish their regular season with a record of 18-2, making a significant improvement to last season’s record of 20-7.

For the first time since 2012, the ladies won the Metropolitan Interscholastic Conference outright by going undefeated in conference play. They solidified their championship title with a conference win over North Central on Jan. 25 by a score of 72-65.

Over the past few years, the Lady Warriors have been putting in work to change the way Warren Central Women’s basketball is seen, both within the Warrior nation and outside of it. Just two years ago, the girls finished their season at a .500 and, since then, have made continuous improvements to every aspect of their game and the Lady Warrior basketball tradition. One major influence for this change has been head coach Stacy Mitchell, who has just finished up his fourth season here at Warren Central.

During the entirety of their season, the team had lost only three games, all ending as close games. After suffering a loss of 49-41 to number one ranked Hamilton Southeastern, the ladies bounced back gaining a five win streak against various opponents from the Indianapolis area.

The girls are already looking forward to next season and what new things they can accomplish and do not believe that they are done making history for girls basketball at Warren Central.

“Everyone needs to watch out. They’re still a pretty good team,” said Beeler. “I think they’ll be in pretty good shape.”