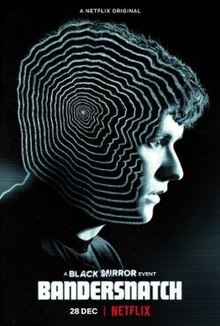 Giving Power to the People

The film is another installment of the Netflix show, “Black Mirror,” which features stand-alone episodes about techno-paranoia. “Black Mirror” typically explores the consequences of technology, free-will and how innovation impacts mental health. In addition, “Bandersnatch” allows viewers to select options that guide the story along several different paths.

Set in 1984, “Bandersnatch” follows the story of a young videogame programmer named Stefan (Fionn Whitehead), who comes up with an idea for a computer game called “Bandersnatch,” using a book of the same name as inspiration. Stefan pitches his choose-your-own-adventure game idea to a startup company, where he meets well-known game developer Colin Rittman (Will Poulter). As the deadline to finish his game approaches, Stefan begins facing hallucination-driven madness, convinced that someone is controlling him.

“Bandersnatch” not only has a pessimistic view of society, but also challenges having power in your own life. This is done by emphasizing the idea that free will is an illusion. In the beginning of the film, it seems as though you are completely in control of what happens, but later it is realized, through several turn-arounds and resets, that viewers are helplessly controlled by creator Charlie Brooker. In the film, Stefan is similarly helpless, being controlled by viewers.

Since the film is interactive, there are many different ways it could end for each individual viewer. It contains what Netflix calls five ‘main’ endings, with different variations of each. Almost every decision a viewer makes, no matter how insignificant it seems, has major consequences. Childhood trauma, acid trips, suicide and even government conspiracy theories are only some of the outcomes involved with “Bandersnatch.”

To get to these outcomes, however, viewers have to experience an endless number of road-blocks, detours and the frustration of indecision. After facing all the different pathways, it can be understood why “Bandersnatch” contains five hours of footage and took two years to create.

“Bandersnatch” director David Slade has given us a huge breakthrough in terms of technology and entertainment. Since “Black Mirror” is already a hugely popular anthology show, it makes sense that the show is well-suited for guiding fans through parallel worlds and down frustrating dead ends. Fox has recently announced their production of their own choose-your-own-adventure movie, but no other company could produce a piece of media that could explore the options in the same psychologically sophisticated way “Bandersnatch” has accomplished.

Creator Charlie Brooker took the film as an opportunity to indulge in mind-bending, philosophical entertainment, which blends really well with the element of choosing your own path. Brooker made sure to program every pathway in the film to mess with your head, just like other “Black Mirror” episodes tend to do.

Ultimately, “Bandersnatch” stands out beautifully from other psychological shows and movies. Not only is it extremely unique, but it also makes you overthink in a way only “Black Mirror” episodes can. Because of this, “Bandersnatch” is worthy of a five out of five. “Bandersnatch” is available to watch on Netflix.