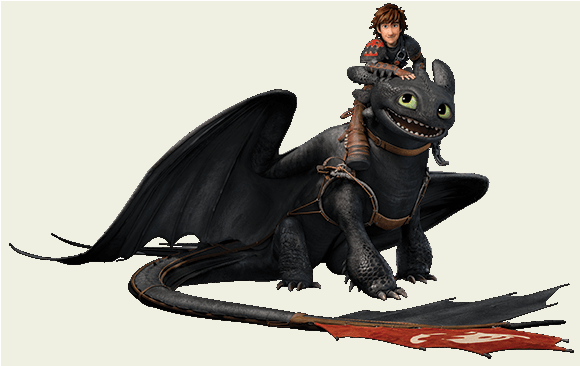 “How to Train Your Dragon” is a series centering around Hiccup Haddock, the son of a viking chief. His father, Stoick the Vast, tries to keep their home, Berk, from being destroyed by dragons who constantly raid their village. Hiccup is smaller than the other vikings and is constantly finding trouble, but he is determined to be a great viking chief like his father. He decides the only way to prove himself is to kill the mysterious Night Fury, a dragon species that has never been seen nor killed before.

With his own invention, he manages to shoot down a Night Fury but cannot bring himself to end its life. He decides to study it instead and eventually gains the dragon’s trust. Hiccup names his new companion Toothless, and he realizes that dragons are not creatures to be feared. But he is soon faced with the task of having to kill again when his father forces him into Dragon Training, so that he can learn to be a great dragon hunter.

“How to Train Your Dragon” is based off novels with the same name, written by Cressida Cowell. The films were created by Dreamworks, better known for their movies such as “Despicable Me,” “Shrek” and the “Kung Fu Panda” series. “How to Train Your Dragon” was a huge success for Dreamworks as it spawned multiple TV series; “Riders of Berk,” “Defenders of Berk,” “Dragons: a Race to the Edge” along with an upcoming video game “Dawn of the New Riders.” The series is loved all over the world, even having an amusement park themed after it in Dubai, and fans have adored the latest, and the last, movie of the series.

“How to Train Your Dragon 3: The Hidden World,” featured Hiccup and his friends, almost seven years after the first movie, training to bring down dragon traders. However, it seems that no matter how many traders they stop, more keep appearing all set on taking Berk’s dragons. Hiccup is also forced to face the issue of overcrowding, since the more dragons they bring home from their raids, the less space there is for the vikings. Hiccup decides it is he and Toothless’ job, as the newly instated chief of Berk and Alpha of all dragons, to venture and find a new home for his people. As he and his friends gather to get a plan, they are met by a man named Grimmel, a dragon hunter who is responsible for the mass killings of Night Furies.

He was hired by dragon traders to end Hiccup’s raids and offer him an ultimatum; either Hiccup gives up his night fury, or he faces the complete destruction of the only home he has ever known. As the people of Berk come together to find a solution, Toothless sees a Light Fury, a completely white dragon that saves him from a trapped laid by Grimmel. As the two become close friends, Hiccup is forced to face the reality that he will have to face Grimmel without Toothless out of fear that he might steal his friend’s only chance at being free.

The film’s dramatic plot was enhanced by the carefully crafted settings that create an atmosphere completely unique to the series. There is a scene where Hiccup and Astrid find the Hidden World, a place where all dragons have escaped to be free. The caves are shimmering with thousands of colors that reveal bioluminescent markings on the dragons, and it leaves the viewer in absolute awe at the visuals Dreamworks created. The human characters are not given overly cartoony movement or exaggerated facial features as most animated movies do, instead they put more unique designs into the dragons. They feature hundreds of different species of dragons in this movie, all with unique designs and sounds. They all move differently, and the attention to details down to the differently patterned scales on the dragon embraces the style that is unique to the HTTYD series.

In the end, it is the characters that truly bring this universe to life. Hiccup, though older now, is still a misfit among his people. He’s a relatable character who has been isolated all his life, but now that he has a strong support system, he is ready to help his village become a safe haven for vikings and dragons alike. Hiccup still stands out in the movies because he is constantly growing and becoming a better leader. His biggest obstacle in “The Hidden World” is facing the fact that sometimes you have to let go of the ones you love.

Hiccup revolts against the idea that Toothless and the other dragons need to leave to find a safe haven of their own without their vikings. But as the movie progresses and Hiccup sees the great life Toothless is being withheld from, he comes to terms with the fact that if he truly loves his friend, he must let him live a life in safety with his fellow dragons.

Another great character who overcomes various obstacles is Astrid, Hiccup’s girlfriend. Astrid is faced with the whole village pushing for a marriage between her and Hiccup that begins to put a divide between them. Hiccup thinks that since his father had to face his problems alone without the help of his wife, he must do so as well. Astrid was Hiccup’s first supporter, the first person to believe him when he said that dragons could be friends. She worries herself when she sees the stress he is under while also fighting her own stress of losing her dragon. However, with the pushing of Valka, Hiccup’s mother, she realizes that they can help each other through their problems, that neither of them have to face their problems alone.

The supporting characters also brought an element of humor to the story. Hiccup’s fellow dragon riders Snotlout, Ruffnut, Tuffnut, Fishlegs, Eric and Gobber all bring the comedy to the movie. Snotlout struggles with not feeling superior over Eric, so he constantly goes out of his way to prove that he is the best leader often times finding more trouble for the group. Ruffnut and Tuffnut, the twins, fight each other constantly, and their bickering and teasing create a lot of the best jokes in the movie. Fishlegs runs himself rampant as he acts as a father to a baby dragon that he carries in a pouch like a human child.

Gobber has been the comedic relief in the past movies and still proves himself to be the funniest among the cast of characters. He panics constantly as more and more dragons show up to destroy his work, and his partner, Eric, makes for some funny remarks as they try to lead the group of dragon riders.

The voices for the characters are all fitting. Jay Baruchel who voices Hiccup, still gives his character his light voice as he has had in the first movie but gives him a mores serious and commanding tone to show how his character has developed. America Ferrera, the voice of Astrid, also gives her voice the same attitude Astrid has in the same movie while also giving her more emotion during the more serious parts of the movie.

This movie is wonderful for all audiences. The ending is satisfying and ties the series together. The movie understands how melancholy the ending is for fans and leaves a beautiful ending message to give them hope that they will see their favorite characters again. “How to Train Your Dragon 3: The Hidden World,” can be seen in theatres, or fans can wait for the dvd release in May.